This January, AWA Studios will unveil Trojan, a new dark web horror series set in a dystopian future. The new series, to be written by Daniel Kraus and illustrated by Laci, explores a near future society that has banished, and even outright killed, mythological creatures, and when a young fairy named Nessa investigates televised murders on the dark web, she finds herself drawn into a simmering conflict between the light and the dark.

In four short years, AWA Studios has positioned themselves as one of the most exciting publishers in the comics’ industry. Founded by former Marvel editor Axel Alonso and publisher Bill Jemas, AWA features some of the most compelling creator-owned titles on the market, such as Primos and Marjorie Finnegan, Temporal Criminal; the publisher has also attracted A-list talent, such as Garth Ennis and J. Michael Stracyznski. AWA has also published a number of quality horror titles, such as Grendel, Kentucky; now, the publisher is taking another bold step into the world of horror with Trojan, and Screen Rant is pleased to bring an exclusive look at the first issue, on sale in print and digital January 4th.

Trojan is set in a bleak, dystopian hellscape. Once, humanity co-existed alongside mythological creatures such as fairies, centaurs and gnomes. In time, things changed, and now these fantastic creatures have been banished to the edges of society. These once proud creatures now live as second-class citizens, subjected to the dark whims of humanity. In an even more horrifying twist, these creatures are murdered, their deaths recorded as snuff films and broadcast over the dark web. Nessa, a young fairy, blackmails a hacker into giving her access to these films, and soon finds herself drawn into this disturbing world–and learns a war is coming, between humans and these creatures they have relegated to the margins. Writer Daniel Kraus is no stranger to horror, having collaborated with both George A. Romero (director of the classic Night of the Living Dead) and Guillermo del Toro. Kraus intends for Trojan to be a metaphor for our modern world, saying the book: “is really about the splitting apart of a society, something that feels extremely topical right now.” The preview pages, shared below, transport readers into Trojan’s dark world, showing a society where hope is in short supply, a world about to burst apart at the seams. 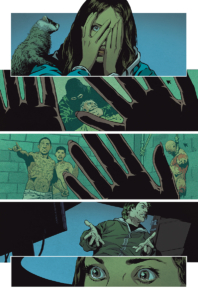 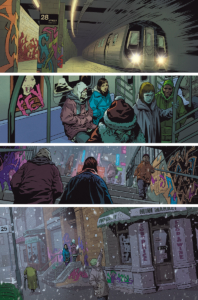 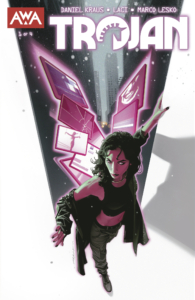 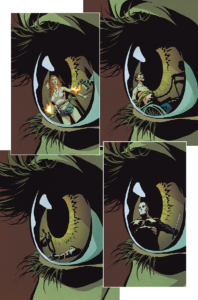 Citing both Romero and Twilight Zone creator Rod Serling as influences, Kraus views horror “through the lens of metaphor,” and Trojan is set firmly in this tradition. The book depicts a starkly-divided society, much like our world today; the mythological creatures and humanity once stood together, but our wicked ways ruined it, forcing them to the fringes of society. The dark web snuff films show humanity’s bloodlust and depravity run deep sometimes, and Trojan does not flinch away from showing this.

George Romero, one of Kraus’ influences, did not shy away from infusing his horror movies with social commentary–Night of the Living Dead was the perfect encapsulation of America in the late 1960s. Now, AWA Studios is set to release Daniel Kraus and Laci’s Trojan, a new dark web horror series that holds a mirror to our own world.

Trojan #1 is on sale in January from AWA Studios!